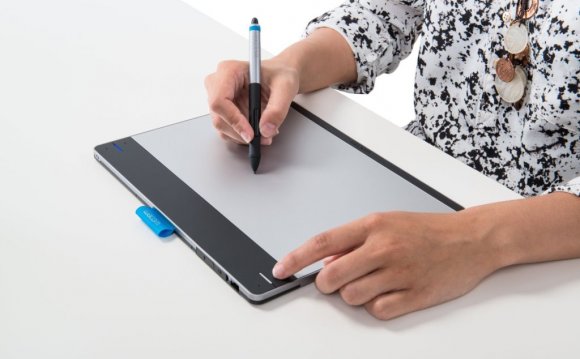 Are you thinking about ditching your mouse and replacing it with a graphics tablet? Do you need more information about features, uses and optional accessories before rushing out to buy one? Not sure which size will best suit your needs? Read on!

What is a Graphics Tablet?

A graphics tablet (also known as a pen tablet, drawing tablet or digitizer) is a hardware input device used primarily by digital artists, though many non-artists use them as well. Graphics tablets have a hard plastic, touch-sensitive drawing surface that transfers stylus or mouse movements to a monitor. The position of the stylus or mouse directly correlates to the position of the cursor on the monitor. It takes a while to get used to drawing on the tablet surface, but once you get over the learning curve, it's as natural as using a pen or pencil on paper.

There are several brands of graphic tablets on the market, Wacom being the most popular manufacturer by far.

Wacom's Bamboo line, geared toward home and office users, is their most basic and affordable tablet. The Bamboo family includes the Connect, the Splash, the Capture, and the Create.

The Intuos series is Wacom's professional line and is used primarily by artists, graphic designers and other creative professionals. It comes in four sizes: Intuos5 Touch Small, Intuos5 Touch Medium, Intuos 5 Touch Large, and Intuos4 Extra Large. All Intuos tablets include touch ring controls, express keys, an advanced pen tip sensor, and 2048 levels of pressure. As an added bonus, Intuos5 tablets have a multi-touch surface. This means you can use gestures to position and navigate just as you would with a smart phone, iPad, Kindle Fire, etc.

The Cintiq, their top of the line model, allows users to draw directly on an HD screen. This is as close to drawing/painting with traditional media as it gets! Technically, the Cintiq is not a graphics tablet. Rather, it is an interactive pen display. Starting at $999 and soaring as high as several thousand dollars onwards, it could clean out your bank account in a hurry. But, if you have the money or a very good reason for needing one, go for it! It comes in three sizes: 13HD, 22HD and 24HD. They also offer the 22HD Touch and the 24HD Touch if you want multi-touch capabilities.

Other Brands to Consider

The following graphics tablet manufacturers don't offer all of the bells and the whistles of a high-end Wacom tablet, but they do offer everything most users need... and at an affordable price.

For home and office use PenPower's TOOYA PRO will do the job. For those who need a bit more functionality, their midrange tablet, Monet, and their higher end tablet, Picasso, are both good choices for professional use.

VisTablet, a newcomer to the graphic tablet market, has been in the tablet business since 2007. Priced under forty dollars, the PenPad is their most affordable tablet. What makes this tablet unique is that the surface is flexible. I'm not sure why this is necessary, but it is a feature nonetheless! VisTablet offers four other models. All are reasonably priced.

If you're thinking about going wireless, the Addesso CyberTablet W10 is one option to consider. Adesso also offers three non-wireless models at various price points and sizes for users ranging from students to architects.