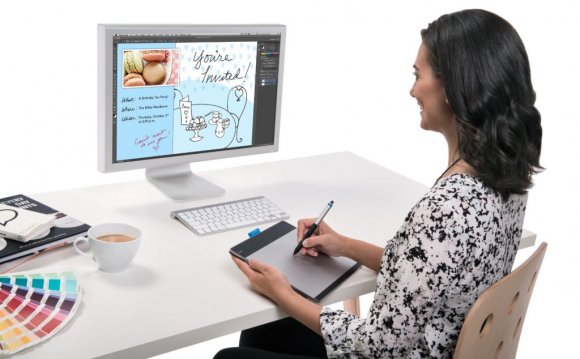 Giant tech event CES2014 is taking place in Las Vegas just now, and hidden amongst all the wearable 3D printers and augmented reality fitness trackers has been some genuinely interesting consumer electronics relevant to the design community.

One such item could be the Asus VivoTab Note 8 - a mid-priced Windows 8.1 tablet that comes bundled with a Wacom digitizer stylus, which the company says will be the "best pen-based tablet for productivity or creativity".

As Asus has gone to the trouble of including a Wacom pen rather than some cheap bit of plastic, the VivoTab Note 8 is plainly looking to make inroads in the professional designer market. The stylus has over 1, 000 levels of pressure sensitivity, providing what Asus describes as an extremely natural writing or drawing experience, and as it docks neatly along the bottom edge of the tablet, it's always on hand when inspiration strikes.

The VivoTab Note 8 is an 8-inch Windows 8.1 tablet with professional Wacom stylus designed for one-handed use

Designed for one-handed use with ultra-slim bezels and an 8in screen size, the VivoTab Note 8 is designed to be used on-the-go. The display has a resolution of 1280x800, and the tablet will be powered by an Intel Atom Z3740 processor with 2GB of RAM and up to 64GB solid-state storage with microSD expansion available too. These are not the highest specs around but plainly Asus is not competing with high-end machines and is aiming to replace your sketchbook rather than your Cintiq tablet.

This is reflected in the price point: the VivoTab Note 8 will be released in the US in early spring, with a 32GB model selling for $300 and a 64GB one going for $350.

Courses in Graphic Design: Illustrating with the Wacom tablet