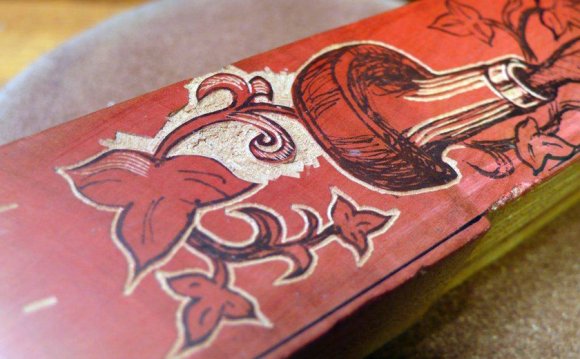 The intaglio printmaking techniques work by incising into the surface of a plate (steel, copper etc.) with tools or with acid. Afterwards the plate is coated with ink. The surface is wiped clean so that the ink remains only in the incised areas. Finally a dampened paper is pressed against the plate.

Engraving is the oldest and most common of the intaglio techniques. Lines are cut into a metal plate using a tool called burin or graver. After the process of incising lines has been finished, the plate is inked. Then the surface of the plate is cleaned and only the ink in the incised lines is left. A dampened paper is put on the plate. With the paper being pressed firmly against the plate, it absorbs the ink left in the lines.

In the beginning copper plates were used. This technique required a professional engraver with skills that could be acquired only in a long apprenticeship. The disadvantage of the use of copper was the limited number of impressions.

Like for a woodcut, hardly more than 2000 or 3000 impressions could be obtained from one plate. This changed drastically with the invention of steel plates by Thomas Lupton in 1822. Now the number of impressions was nearly unlimited.

It is one of the very old techniques dating back to the fourteenth century when it was used to apply decorations on armor. Rembrandt in the middle of the seventeenth century pushed the etching technique to new heights.

For the drypoint technique, the lines of the image are scratched directly into a plate with a sharp needle called the drypoint needle. Where treated with the needle, rough metal edges are thrown up, the so-called burr. This burr holds the ink very well. Different from engraving, this burr is not removed before the printing process. The drypoint technique typically produces prints with irregular, more fuzzy lines.

For the plates, tin or copper is the preferred material for the drypoint technique. From a commercial point of view, drypoint has the disadvantage of a fast wear of the plates.